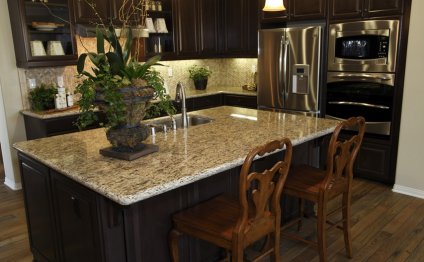 The floor plans that work best with kitchen islands are the L-shaped and straight (or one-wall) kitchen.

In the picture below, the island is used exclusively for food preparation and seating. Depending on the adjacent rooms, this island could work equally well if it lay on the diagonal across this open side of the kitchen.

In the one-wall kitchen design shown above, the sink and stove top could be either on the counter run or the island. The image above shows a design where the island is used as the food prep counter and also contains the dish washing sink and dishwasher. The stove top is on the counter along with two wall ovens at the end of the counter. The floor plan below shows the reverse of this with the stove top on the island.

Your design should allow for an efficient work trianglethe imaginary work triangle formed between the sink, fridge and stove top.

When designing a kitchen, consider the island as another counter or work surface and decide how it will be a part of (or not a part of) the kitchen work triangle.

Many designers suggest a separation distance of three feet from the island to any other counter top. Others suggest 3 1/2 or 4 feet. My belief is that the distance really depends on the layout and how the kitchen is used. In my opinion, even a distance of 5 feet can be appropriate for some designs. The decision for the distance between the counter and the island should consider the number of cooks using the kitchen and the location of appliances. If a refrigerator or an oven door will swing into the space between the island and counter, ensure that there is adequate space for someone to get between the door and the counter. For a one-wall kitchen (as pictured above), adding an island essentially turns it into a galley kitchen layout.

L-shaped kitchen island designs can improve traffic flow by allowing for two ways of entering and exiting the kitchen space.

The nice thing about both the L-shaped and one-wall kitchen island designs is that they allow for counter seating on the non-kitchen side of the island. This can help keep those not helping with food prep out of the kitchen work triangle but still in the company of those in the kitchen.

The other side of the island is also a wonderful place for the dining room table. Many designers are now opting for eliminating the two tables (kitchen and formal dining) employed in many homes, and choosing instead for a dining table on the non-kitchen side of the island. This table area can still be as formal or as casual as you choose. A careful interior design with appropriate lighting and perhaps an area rug in this location can create the ambiance you are looking for.

Some also choose to put a raised backsplash on the "dining room" side of the island to reduce sight lines into a potentially messy kitchen area.

Island Design for U and G-Shaped Kitchens

Other layouts such as U and G-shaped kitchens can also support an island but are generally not for the faint of space. Considering a minimum spacing of 3 feet between counters and an average counter depth of two feet it's easy to see that the minimum width for these layouts with a small (2 foot wide) island would be 12 feet. But that said, a 12 foot wide U or G-shaped kitchen would have a very cramped work area and the island could just end up being an obstacle.

To incorporate an island in this kind of design, the traditional work triangle should not require walking around the island. Ideally the two sides of the island would have different functions. For example, meal preparation on one side and perhaps the other side for simply making coffee, tea and preparing light snacks that do not require the stove. Some may also want to have a kitchen desk and communication area with telephone and a computer on the non-food prep side of the island.

The biggest difficulty with kitchen island designs for a U or G-shaped layout is that the existence of an island invites people into the kitchen to hang out. If the island does not have adequate aisle space around it (more than four feet) to accommodate those extra people, it will be impossible to cook in this kitchen. This type of layout requires a fair amount of space to avoid traffic congestion.

Often a homeowner or designer puts in a kitchen island merely since they feel a quality kitchen should have one. This is not necessarily true. A U-shaped floor plan can create the same effect as a kitchen island does by using one arm of the U as a peninsula with seating on the non-kitchen side (as shown in the image below).