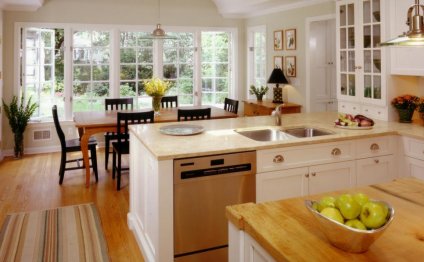 In the Kamakura period (1185–1333), as the Shoinzukuri style of housing became common, the kitchen was gradually absorbed into the house. Until then, a kitchen was built as a separate house whenever possible to avoid smells and smoke, and to prevent possible kitchen fires from spreading to the primary residence. Kamakura era kitchens did not include essential kitchen furnishings, such as a sink or a well.

A in a traditional Japanese kitchen.

The earliest dwellings in Japan used an open fire hearth for cooking. The first stove was recorded in the Kofun period, between the 3rd to 6th century. These stoves, called, were typically made of clay and sand; they were fired through a hole in the front and had a hole in the top, into which a pot could be suspended from its rim. This type of stove remained in use for centuries to come, with only minor modifications. In the 14th century, in the Muromachi period, stoves with two holes were recorded in drawings. By the early 17th century, the beginning of the Edo period, large stoves with several cooking holes were common in the kitchens of the upper class house as well as in large restaurants. It is believed these multiple hole types appeared earlier than recorded but were omitted from drawings of the time because inclusion of a single hole stove was sufficient to indicate a kitchen. The stove was low, meaning cooks had to squat to cook. In the larger kitchens, especially those of palaces and temples, raised that could be operated while standing up were developed in the Edo period (1603–1867).

Irori (囲炉裏) appeared in the Kofun period and served as a secondary stove. A section of wooden panels were removed from the floor and a lacquered square wooden frame was fitted in the place. The frame was filled with sand and an iron hook was lowered from the ceiling. Foods were reheated or cooked over in an iron pot hung from a hook and the fire served as a heat source. This type of stove became common in many homes by the early Nara period and a smaller irori is the center piece of a tea house.

A third type of stove, a hibachi (火鉢) lit. "fire pot", appeared as late as the early Heian period but is likely to have been used earlier. A hibachi is a deep small pot half filled with sand and ash and a small fire was started in the pot. It was used as a safer form of heating equipment than was available previously and could be used to cook small morsels of food.

Fire was a part of a kitchen from the start, but water was late in becoming a part.

In the Yayoi period (300 B.C. to A.D. 250), the cultivation of rice became widespread, and villages would be constructed near a marsh and a lowland. The water was muddy and asaido (浅井戸) lit.) shallow wells, were constructed. An asaido was filled with sand and pebbles through which the water flowed to filter out mud and larger organisms. A deeper well was also dug and sometimes a hollowed log was inserted into the well to prevent the walls' collapse. A pot was used to scoop water.

It was not long before people started improving on these primitive wells. The area around a well was tiled with stones, then fune (水船) was invented. Wooden or bamboo shafts were used to carry water from nearby wells and springs to a fune or manually filled by women. Water was carried from these fune to a water vase from where it was used. Sometimes a fune was made inside a house, but it did not have the function of a sink. It was used to collect and store water and nothing more. Fune later became a part of a Japanese garden.

The first time that a sink appeared in a drawing was in the Bokie (慕帰絵) written in the early Muromachi period. The kitchen of the Nanrou temple (南瀧院) had a large sunokoyuka (すのこ床) lit. drainboard floor, next to a stove with a water filled oke and hisyaku (syaku) for washing. This sunokoyuka was made with split bamboo and water would drain through gaps between the canes. Even though in many places a sunokoyuka was made over a river and washing was done, to make a part of the kitchen floor into sunokoyuka to use as a drain was an innovation. This did not pose a health problem as kitchen scraps were meticulously collected and used to make a compost. Few Japanese ate meat due to the Emperor's decree in the 8th century and animals and birds were slaughtered away from a house. Until late Edo period, this type of kitchen was widely used.

Shoinzukuri became the standard style of building a house beginning in 13th century and it was revolutionary for combining fire (stove) and water (well and drain) into a single place. It was still few steps short of a kitchen. In the early stage of Shoinzukuri style, instead of the kitchen being a room inside the omoya (母屋) or the main building, it was connected by a corridor and existed inside one of many sub-buildings. However, it did have a kamado, a irori, a well, and a sunokoyuka in the same room.

In the Edo period (1603 to 1868), daidokoro came to mean "kitchen" and became an integrated part of the house. It was, however, more common to call it katte (勝手) which is used to mean the "back door." The pantry room was called ozenntate (御膳立). Upper class houses were well stocked and extremely large by today's standard. The country house of Tokugawa Mitsukuni, known as a gourmet of Edo period, had kitchen spaces at least 34 jyou or about 53 square metres. This is more than one-third of the entire house and does not include the sake storage room or the pantry. Some kitchens had running water by having bamboo shafts connected to the water source extend into the kitchen; users of less well equipped kitchens fetched water from a common well. A separate kitchen within the house had become customary and all but the smallest single-room houses had one.

Storage in kitchens was provided by . These are Japanese style chests, often with a mix of compartments behind sliding doors and drawers of varying sizes. These are still available today as antiques, or altered reproductions tailored to a more modern/western style of kitchen.

An American scientist, Edward S. Morse, recorded many of the kitchens in urban and rural areas in the early Meiji period (1868–1912). These kitchens were not much different from those in the Edo period as home use of gas and electricity had only just begun in America and Europe. Though it was costly to lay down infrastructures, these were dutifully laid down, with heavy subsidization by semi-private and national companies.

The early 1900s brought a change in Japanese cuisine. Foreign cuisines from every part of the world flooded Japanese cookbooks, part of the haikara boom (ハイカラ, literally high collared, taken from high-collared coats popular in Europe). Popular dishes like curried rice, sukiyaki, ramen, and gyudon appeared during the Meiji period as a part of the haikara movement and represented a fusing of traditional Japanese cuisines with other cuisines. Kitchens were completely reorganized to cook these foods; kitchens of the Edo period were used for simple menus of rice, broiled fish, vegetable soup, and pickled vegetables.