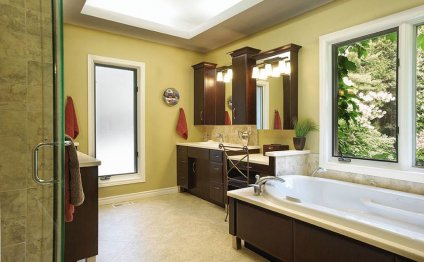 People love extra space in their bathrooms, which is why almost every bathroom built in new homes today has a spa or "retreat" feel to it. It's also why remodelers have been keeping busy for years renovating and adding space to the small, utilitarian bathrooms found in almost every home built before the 1980s.

But sometimes, due to local codes, lot restrictions, budget constraints or any number of other reasons, adding square footage isn't an option. However, there are several principles and techniques you can use to provide an expansive feeling in a small space.

Color Schemes. Pale, soft colors on the walls and floor tend to give the illusion of space. Avoid the use of strong colors except on accessories, and recommend to your clients that they use bright, exciting colors on towels and decorations. "Colors are largely a matter of individual taste, " says Bruce Rosenthal, owner of Rosenthal Enterprises in Roswell, Ga. "I'm seeing some of my clients go for deeper, richer colors in small bathrooms, but I always try to talk them out of what would appear to be a 'dark' color, as they tend to make a small room feel even smaller."

Use of Glass. Rosenthal also recommends using a lot of glass and reflective surfaces in a small bathroom. Getting rid of a shower curtain or frosted glass shower door and replacing it with a clear glass door will open up the shower space, making it a part of the entire room and giving the appearance of more overall area. "Once you open up a shower like that, you can install multiple shower heads to provide a spa-like feeling. This also makes the shower itself appear larger than it really is, " he says.

Cabinets, vanities, countertops and shelving made of reflective surfaces also lend an expansive feeling to a small room. Larger mirrors will reflect the light wall colors and provide the same illusion. And of course, there is the age-old trick of installing two mirrors on opposite walls, so they reflect back at each other and "create" space where there is none.

Natural Light. A bay window would be ideal in a small bathroom; the alcove will also provide needed shelf/storage space. But if the room's layout prohibits placement of a bay window, a small operable window outside the shower or even a glass-block window in the shower allows plenty of sun and provides an open, airy feel. Regular or tubular skylights are other great options to let the sun in.

Artificial Light. Recessed lighting is unobtrusive and won't "bring the ceiling down" to make the room feel shorter, plus it can be placed anywhere in the ceiling and focused onto any task area. The bathroom is an area that demands a lot of light, but Rosenthal cautions against overkill. "Too many fixtures or fixtures of the wrong type can give off a lot of heat, " he says. "That's not only a waste of energy, but it can make a small room uncomfortably warm in only a few minutes."

"Extra" Floor Space. If an alternative storage space or linen closet is available, try to sell your clients on replacing their vanity cabinet with a pedestal or wall-mount sink. While the additional floor space won't exactly be usable, it will trick the eye into believing the room is larger. You might even consider a wall-mount toilet or replacing a 16" toilet with a 14" model. Again, the extra floor space will be useless except for effect.

Embellishments that Expand a Space. To expand a small ceiling, you might want to try installing crown molding. Just be sure the scale of the molding is not too large for the space. "I almost always put crown molding up, " Rosenthal says. "It lends a 'royal' feeling to almost any space. In some cases, I also like to put up a chair rail and wainscoting. The urethane moldings like those from Fypon really perform well in these moist environments; they don't shrink and swell from changes in temperature and humidity nearly as much as wood."

He also likes to use as much tile as he can in small bathrooms. It is not only easy to clean and care for, but "it is a bright, waterproof and modern-looking material that can really make a bathroom visually stunning and practical at the same time." In case you missed it, many of you smarties dispensed an overflowing bathtub’s worth of great bathroom remodeling tips during…